A rear spoiler produced with a new organic SMC. The researchers were able to fill complex ribbed structures with conventional processing parameters. They found no separation of the fiber and the matrix. Photo credit: Institut für Verbundwerkstoffe (IVW)

Lorenz Kunststofftechnik GmbH (Wallenhorst, Germany), a producer of semi-finished polymer products for a variety of industries, has developed an organic sheet molding compound (SMC) that can accommodate natural fillers and fibers – such as hulls and ground sunflower seed reeds. , and the Leibniz-Institut für Verbundwerkstoffe (IVW, Kaiserslautern, Germany), a non-profit research institution of the State of Rhineland-Palatinate and Technical University of Kaiserslautern specializing in the development and processing of composites. The goal is the development of a thermoset composite with relatively low CO2 footprint.

Peter Ooms, Director of Sales and Business Development at Lorenz, says: “We have assisted the IVW with our expertise and SMC materials, as well as in subsequent testing for industrial production. The Kaiserslautern Institute carried out the preliminary laboratory-scale tests, general research and formulation development of the new organic SMC. 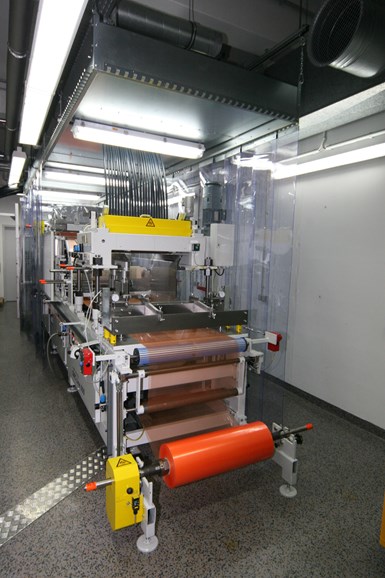 The two organizations developed a material specification sheet based on a survey of 30 companies from various industries, including electrical, automotive and industrial equipment. “Our survey showed that different industries have different requirements for the material,” Ooms explains. However, almost all wanted it to have a life cycle assessment (LCA) to document environmental and CO aspects.2 reduction in production, as well as recyclability. We have chosen the possible organic materials for SMC production based on these requirements.

The partners decided to develop a fiberglass SMC which partly includes an organic based filler. For the filler, several options were considered, including shells and reeds of crushed sunflower seeds, wood flour, recycled calcium carbonate from industrial water softening plants and recycling materials. thermosets. As part of an additional sustainability initiative, raw materials were purchased within 500 kilometers of the Lorenz factory.

Research on SMC and fillers and how materials could be processed has been done at IVW. Factors considered included impregnability, density, viscosity and availability of the raw material. The researchers worked with an unsaturated polyester (UP) resin and an anti-shrinkage additive as they developed the formulation.

Next, the partners defined the parameters of a demonstrator combat component to be manufactured with the new material. “This demonstrator ‘helped us to examine the flow and mold fill behavior of the material and compare it with conventional SMC semi-finished products,” says Dr.-Ing. Florian Gortner, IVW scientist. “Based on these results and the press rheometry tests, we built a simulation model to demonstrate the flow behavior and allow predictions on other mold geometries.

After initial research, a basic SMC resin paste was developed comprising an unsaturated polyester resin (UP) with an anti-shrink additive, magnesium oxide and an internal release agent to thicken the resin, and a color paste. This resin paste was tested so that researchers could understand how each of the individual components interacted within the SMC. Series of iterative tests of resin formulations with different fillers ultimately resulted in a number of organic filler-based resins with the desired viscosity, flow and impregnation behavior. 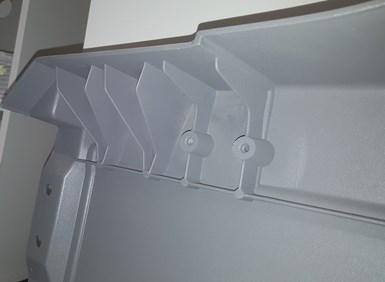 Such demonstrators were used to compare the flow and fill behavior of the new material with that of conventional SMC semi-finished products, including in very detailed molds. Photo credit: IVW

Gortner says, “Magnesium oxide and an internal mold release agent were used to thicken the resin, and a color paste was added to color the semi-finished products. Based on the results of the investigation, we added other additives and adapted the resin paste to the application.

They ran through several iterations of the formulations until they found those that exhibited the desired viscosity, flow and impregnation behavior. The resulting material enables the production of semi-finished products with lower density than conventional SMCs, which Lorenz hopes will be attractive to the electric vehicle market. The next step will be to produce a commercial version of the resin, which Lorenz plans to accomplish this year, according to Ooms.

“Now that with IVW we have successfully manufactured this new thermoset, we anticipate further improvements for practical applications,” Ooms adds. For example, Lorenz may develop iterations of the material that vary the amount of resin paste in proportion to the loads, or substitute fiberglass for natural fiber, depending on the application. Lorenz also says that unsaturated polyester resins could also be replaced by resins that are safer and more environmentally friendly.

According to Gortner, “The objective of our research project was to show that the use of organic-based components in thermosetting semi-finished products is possible. Thanks to Lorenz’s active support, we were able to do this successfully and will continue to integrate the experience feedback from industrial production into our results.