Mihail Marin: My most memorable game

Mihail Marin was born in Bucharest on April 21, 1965. Multiple Romanian champion, his first major international success was achieved in 1987 when he qualified for the Interzonal tournament played in Szirák. Three years later, he plays at the Manila Interzonal. In 1988, Marin won the bronze medal on board 3 at the Olympics in Thessaloniki – it was the first of twelve Olympics in which he represented Romania, the last to date being Baku 2016.

For many years Marin worked as Judit Polgar’s second, and in 2005 he accompanied the Hungarian star to three elite tournaments, including the World Championship in San Luis.

Besides being a strong player, Marin has written a number of well-received books. Learn from legends was named the 2005 ChessCafe Book of the Year, while Secrets of chess defense was nominated for the ChessCafe Book of the Year 2003, to name just two of his greatest hits. Jeremy Silman, also a well-known author, wrote on Learn from legends: “I don’t remember seeing a better book in the last two decades”.

In a long interview with the Romanian grandmaster after winning the ChessCafe Book of the Year award in 2005, the 40-year-old was asked if he plans to devote himself fully to his career as a writer and teacher. Marine replied:

Win against the Classic Slav

The videos on this DVD give White a repertoire with concrete variations against all the main lines that Black can play and also show the typical Slavic strategic and tactical ideas and the hidden intricacies of the position.

Time and human resources are so limited that I still cannot fully adapt to the dual nature of my professional activity. I obtain the best results (in both areas!) When I manage to induce in me the psychological approach of an amateur: the pure pleasure of practicing my leisure activities without a concrete goal. However, it can also happen that I am working on a book while waiting for the next tournament to come or, on the contrary, that I ruin a tournament that started well just because I have so much to write in mind.

Taimanov wrote that whenever he plays chess he relaxes from the piano and vice versa, adding that it has given him endless vacations. He must have had a very happy life. This is the state of mind I would dream of.

The Romanian is still a very active player. In fact, he is currently playing the Benasque International Open in the heart of the Pyrenees.

Marin wrote or collaborated with over 30 ChessBase FritzTrainers. 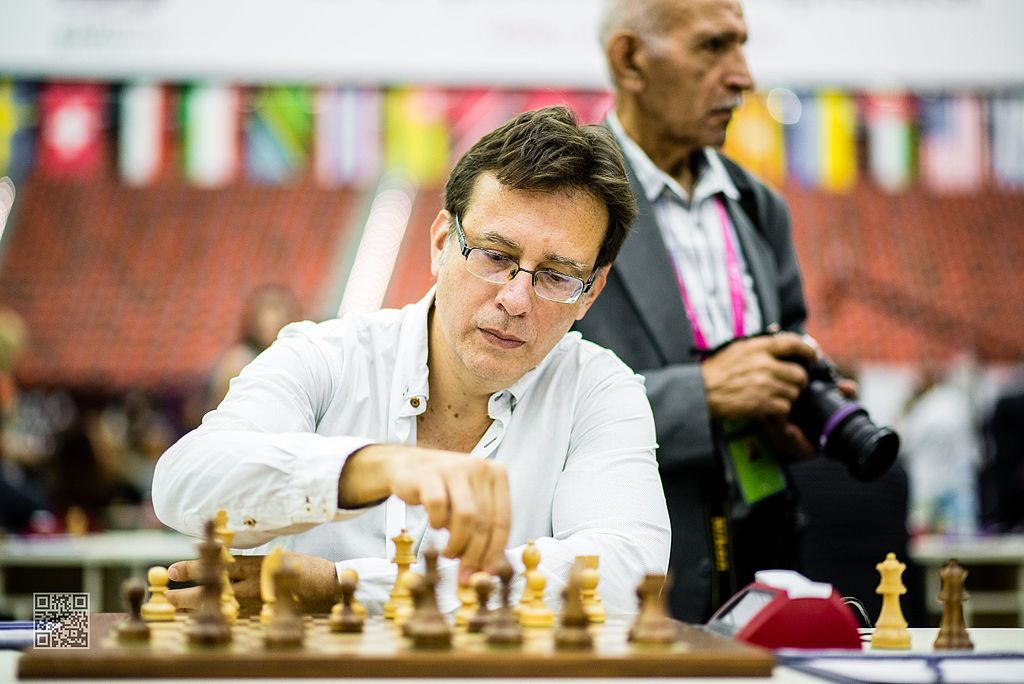 Played at the 1996 Chess Olympics in Yerevan, Marin’s most memorable match was a fierce fight against Belarusian general manager Aleksej Aleksandrov.

How can chess players, whether professional or amateur, ensure they reach the best form in a tournament? Many generations of players and coaches have worried about this critical tension, but as far as I know, no one has given a 100% valid answer yet.

You sit down for your first round match, hoping for the best and trying not to think of the worst. You should be aware that only a few rounds later, or maybe right after the tournament is over, will you be able to tell whether you were in peak shape or not. I have always tried to train my mind before tournaments by solving tactical puzzles, and this method usually worked well.

This DVD offers Black a complete repertoire against all the weapons White can use on the sixth move. The recommended repertoire is not as risky as that of other Sicilians, but still offers blacks a lot of counterplay.

Over the years, I discovered that in order to play tournaments and games that I could be truly proud of, one more ingredient that I couldn’t control was needed: I needed to feel good about myself. the city or resort town tournament. Judging from several points of view, the 1996 Yerevan Olympiad was anything but the optimal environment. Our hotel (was it called Yerebuny ?!) was modest and most of my teammates rated the food as absolutely terrible.

Personally, I didn’t feel any of that. After serving in the military, I cannot be so easily afraid of such details. Following the presidential elections and the failed putsch that followed, tanks and soldiers took to the streets and gunshots and screams could be heard during the night. It was a little weird, sure, but it also added a bit of excitement. I remember wanting to take a picture of the tanks lined up in the central plaza, when a soldier told me I shouldn’t.

On top of that, I had a permanent headache during the first half of the tournament. The journey had been long and tiring and there had perhaps been a mystical influence from Mount Ararat, the place where Noah’s ark landed a long, long time ago. Despite all these factors, I really enjoyed my participation in this Olympiad. A quarter of a century has passed, so my memories are no longer so vivid, but I think I was touched by the
the kindness and warmth of the people, and the fact that I was constantly curious about the culture of this small remote country.

In short, the place offered me the best environment – it made me feel like I was in a real love affair with the city and its people. I started with two wins and after a day off I drew Black against Michael Adams. I remember how amused I was during this game, noticing that my opponent’s rating was 155 points higher than mine. During my many openings, I have generally had the situation reversed! 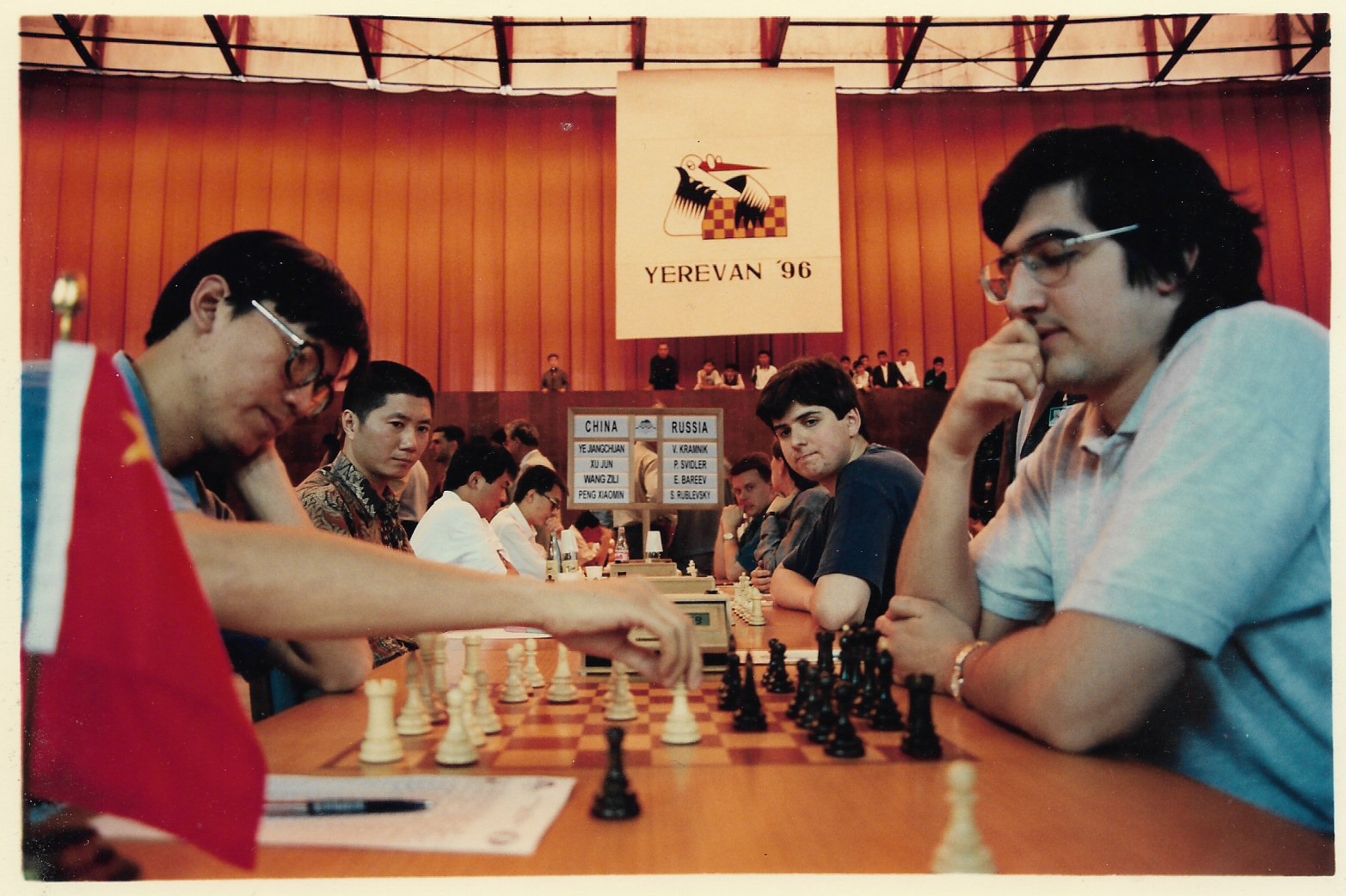 In the classic King’s Indian system, White grows naturally and refrains from hunting ghosts in search of a refutation of Black’s setup. Instead, White is relying that natural play should give him a small but lasting advantage.

In the fifth round, we faced the strong Belarus team, with Boris Gelfrand in the lead. On the second board I played against a very talented and strong young player, Aleksej Aleksandrov. Some of my colleagues were very careful to scare me about the “beast” I was going to play against.

Things turned out my way and I managed to win a great game. A friend of mine, belonging to the world elite at the time, congratulated me and told me that he thought it would be the best game of the whole Olympiad!

Towards the end of the tournament, I found out that there was a competition for the best three matches, awarded by Armenian President Levon Ter Petrosian with US $ 4000, 2000 and 1000 respectively. I quickly annotated the game – handwritten on paper – and handed it to the competition coordinator, the legendary Grandmaster Eduard Gufeld. I strongly
remember the scene. Gufeld, who was eating a huge sandwich, used his free hand to pick up my paper and crumple it up, casually putting it in one of his pockets.

I didn’t have high expectations after this episode, but a year later the results of the competition were announced: my game was awarded the second prize! I was of course very happy, both emotionally and financially, but I was annoyed by a small detail. My aforementioned friend, who was on the jury, did not award any points for my victory! I don’t know what made him change his mind, but if he had placed it even in third place in his review, I would have had the top prize!